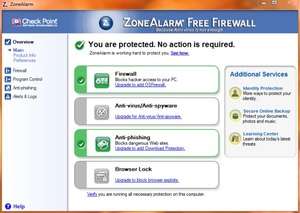 “A free version of a popular firewall application”

A review of ZoneAlarm Free Firewall by Fernando Ortega

A computer connected to the Internet is subject to intrusion by malicious users. The best remedy against this danger is a firewall such as ZoneAlarm.

ZoneAlarm is a free firewall with more than a decade of experience. Once installed, your computer is behind an impermeable wall in which only you can authorize the passage of data between programs and the network.

The golden age of free firewalls ended when Microsoft decided to include a firewall in Windows XP. ZoneAlarm has suffered, thus a significant reduction in number of users and popularity.

It looks cooler than the original and it certainly does seem to have less configuration options and features. Still, ZoneAlarm is still an excellent firewall.

This download is licensed as freeware for the Windows (32-bit and 64-bit) operating system on a laptop or desktop PC from firewalls without restrictions. Zone Alarm Free 15.8.139.18543 is available to all software users as a free download for Windows 10 PCs but also without a hitch on Windows 7 and Windows 8.

Compatibility with this port blocker software may vary, but will generally run fine under Microsoft Windows 10, Windows 8, Windows 8.1, Windows 7, Windows Vista and Windows XP on either a 32-bit or 64-bit setup. A separate x64 version of ZoneAlarm Free Firewall may be available from Zone Labs.

Ranking in
Firewall Software
#5 of 33